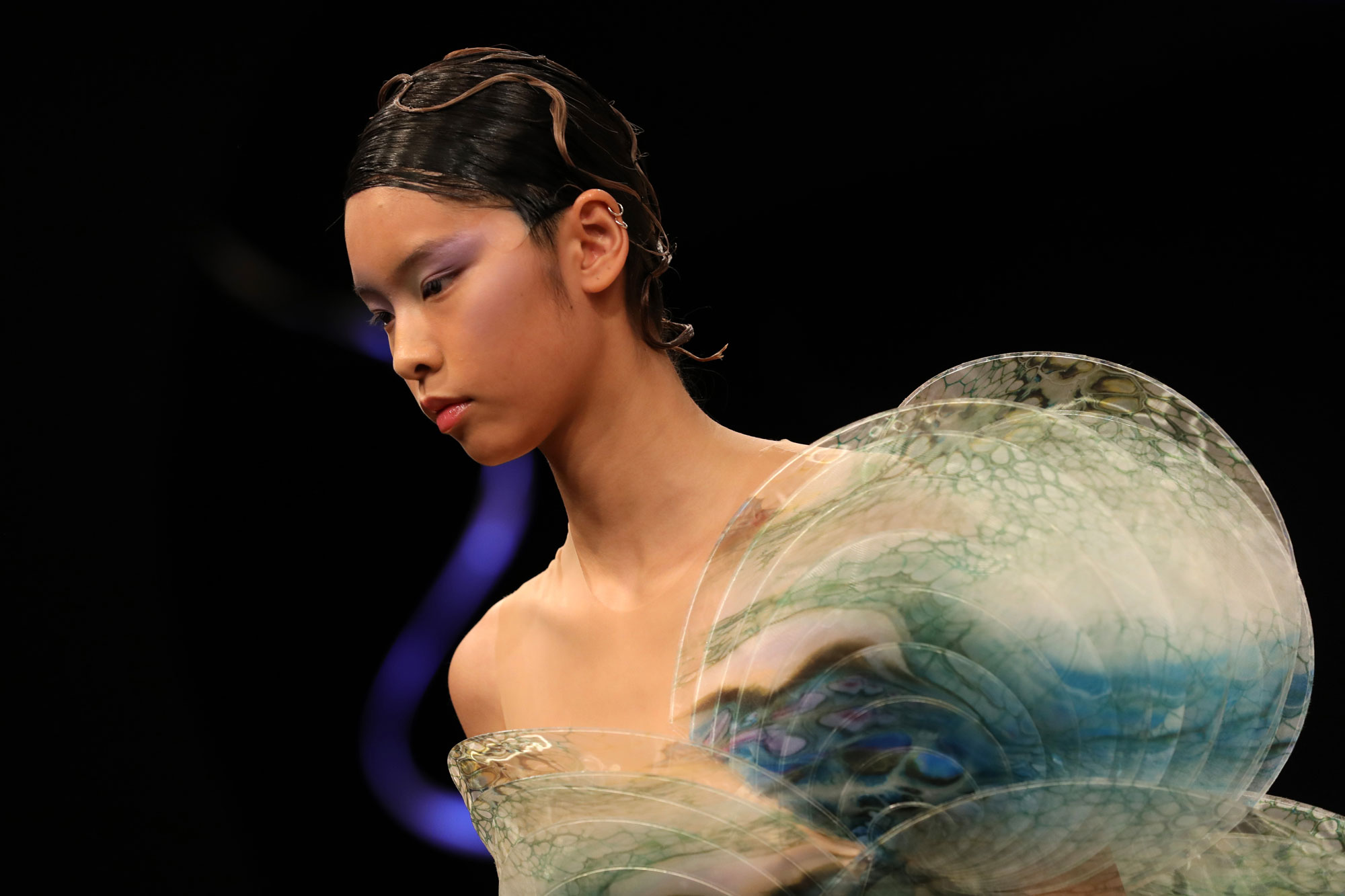 Couture season is what lucid dreams are made of and the beauty looks faithfully complement the meticulous designs. Whether it was a sweetly minimal approach or maximally over-the-top, the spring couture collections showcased the extent of unabashed creativity, both on faces and lithe frames. Models.com takes a glimpse at the hair and makeup looks that made an impression this Spring 2020 season. 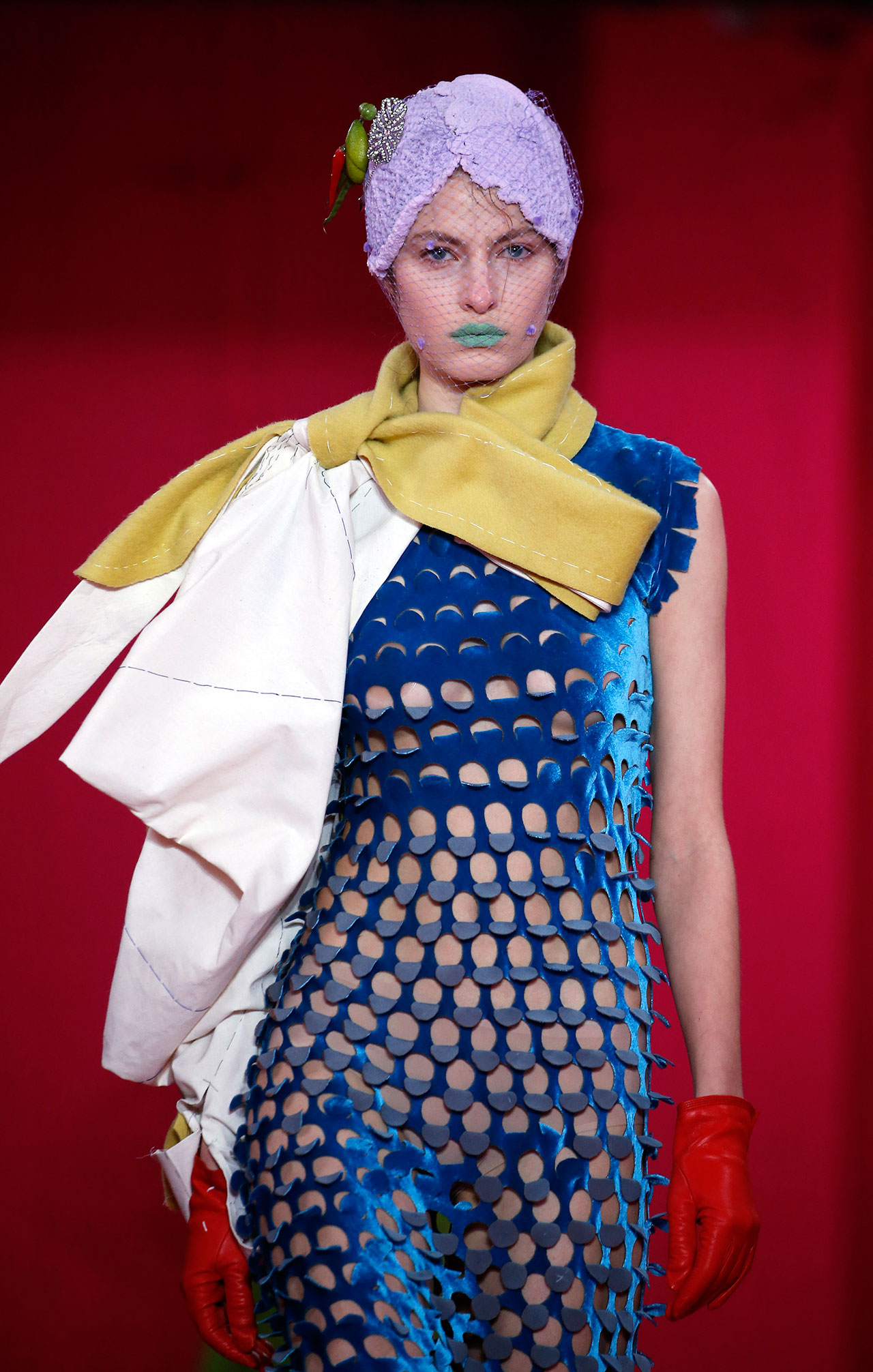 Photo by Thierry Chesnot/Getty Images
John Galliano continuously brings outrageous looks in his co-ed procession for Maison Margiela Artisinal. An amalgamation of references also came out in the beauty with Pat McGrath’s saturated lips and Eugene Souleiman’s topsy-turvy designs that had a hint of prim to them. Felice Nova Noordhoff in look 1 sports both artists’ work with panache. 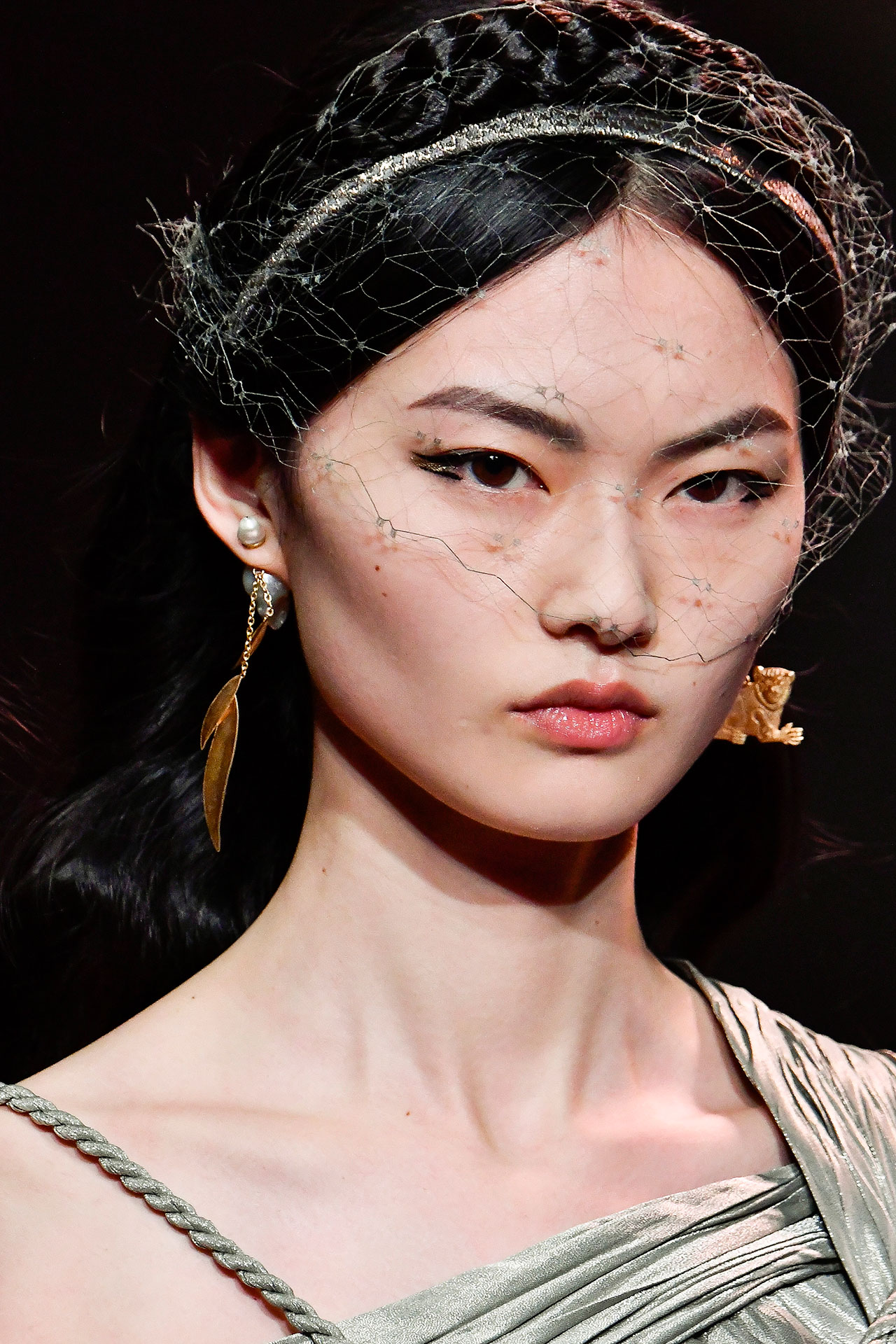 The sleek braided crowns at Dior added to the goddess narrative that Maria Grazia Chiuri dreamt up for couture. Created by Guido, models wore delicate veils with Peter Philips‘ graphic liner, gilded in gold like here on He Cong. 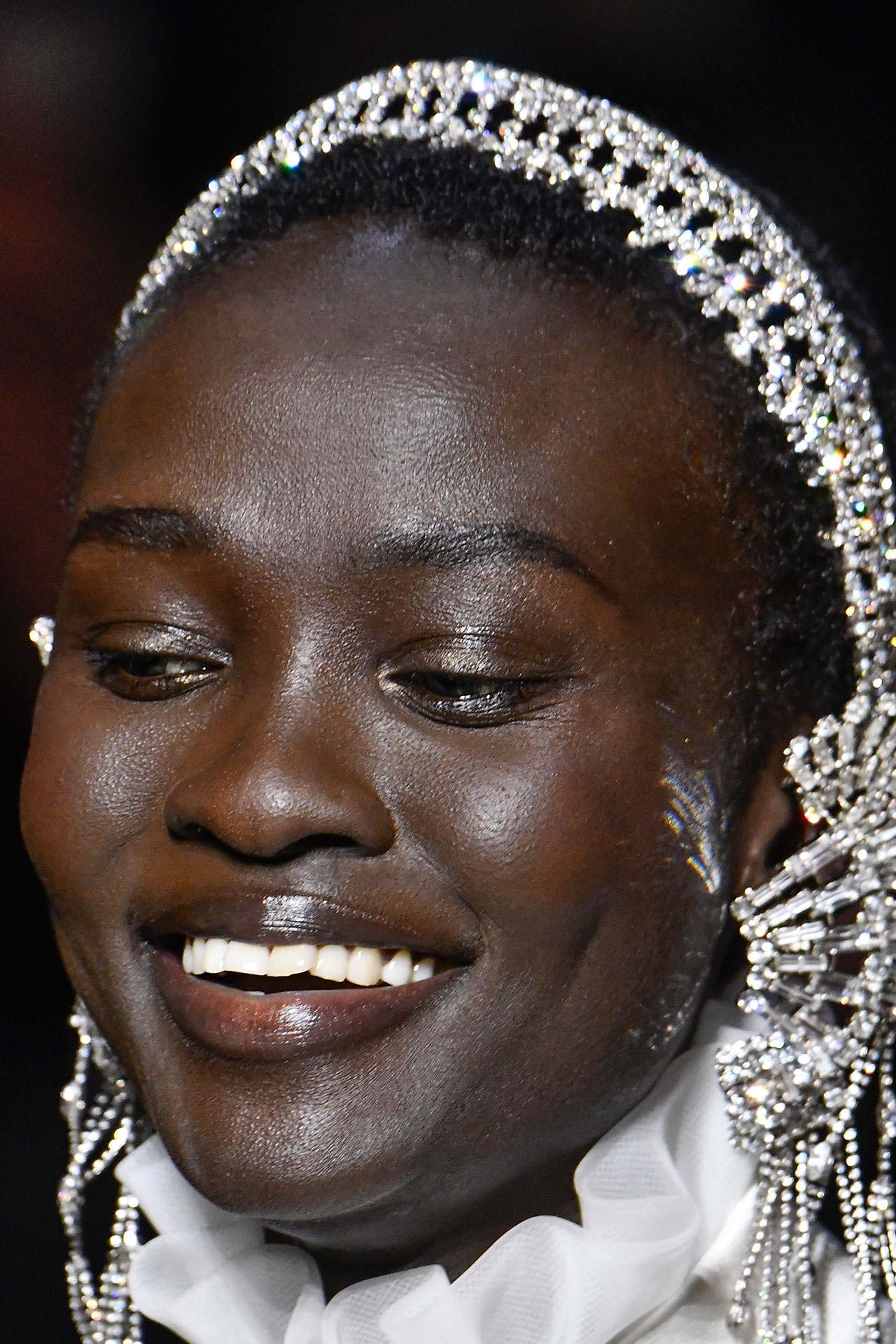 Photo by Victor VIRGILE/Gamma-Rapho via Getty Images
Paul Hanlon coiffed both a sleek, middle part or kept things natural at Givenchy. The hottest accessory? Seriously beaded and blinged out headbands that were as romantic as they were impressive. Aliet Sarah had the best one, minimally mirrored with Pat McGrath‘s blessed touch in the inner eye corners. 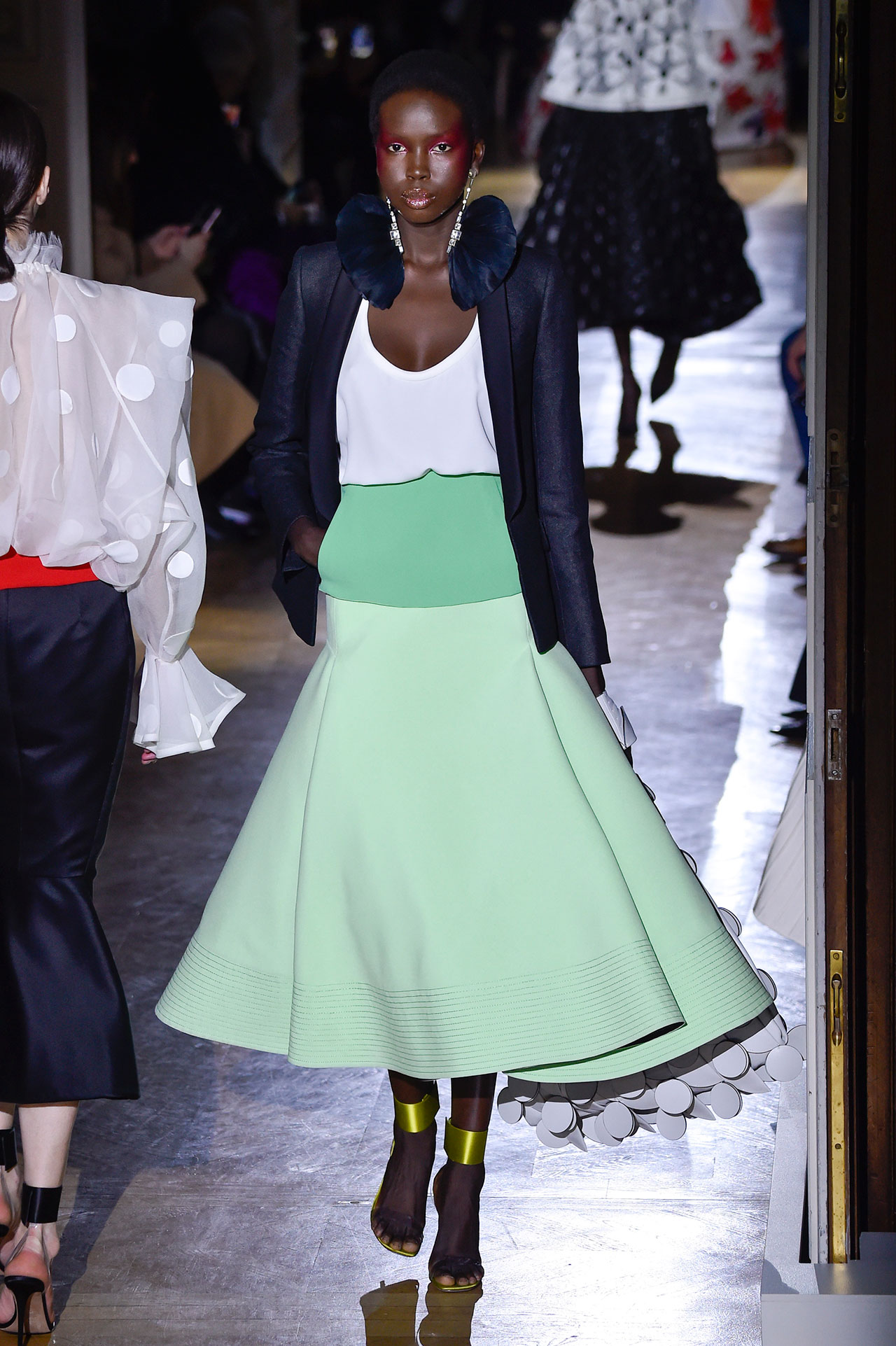 Photo by Peter White/Getty Images
Extreme color and proportion was emphasized at Valentino which was echoed in terms of beauty with Guido and Pat‘s bold bouffants and strongly flushed cheeks. Ajok Madel wears the latter, contrasting her mint green ensemble with a soft magenta that blends into her eyelids. 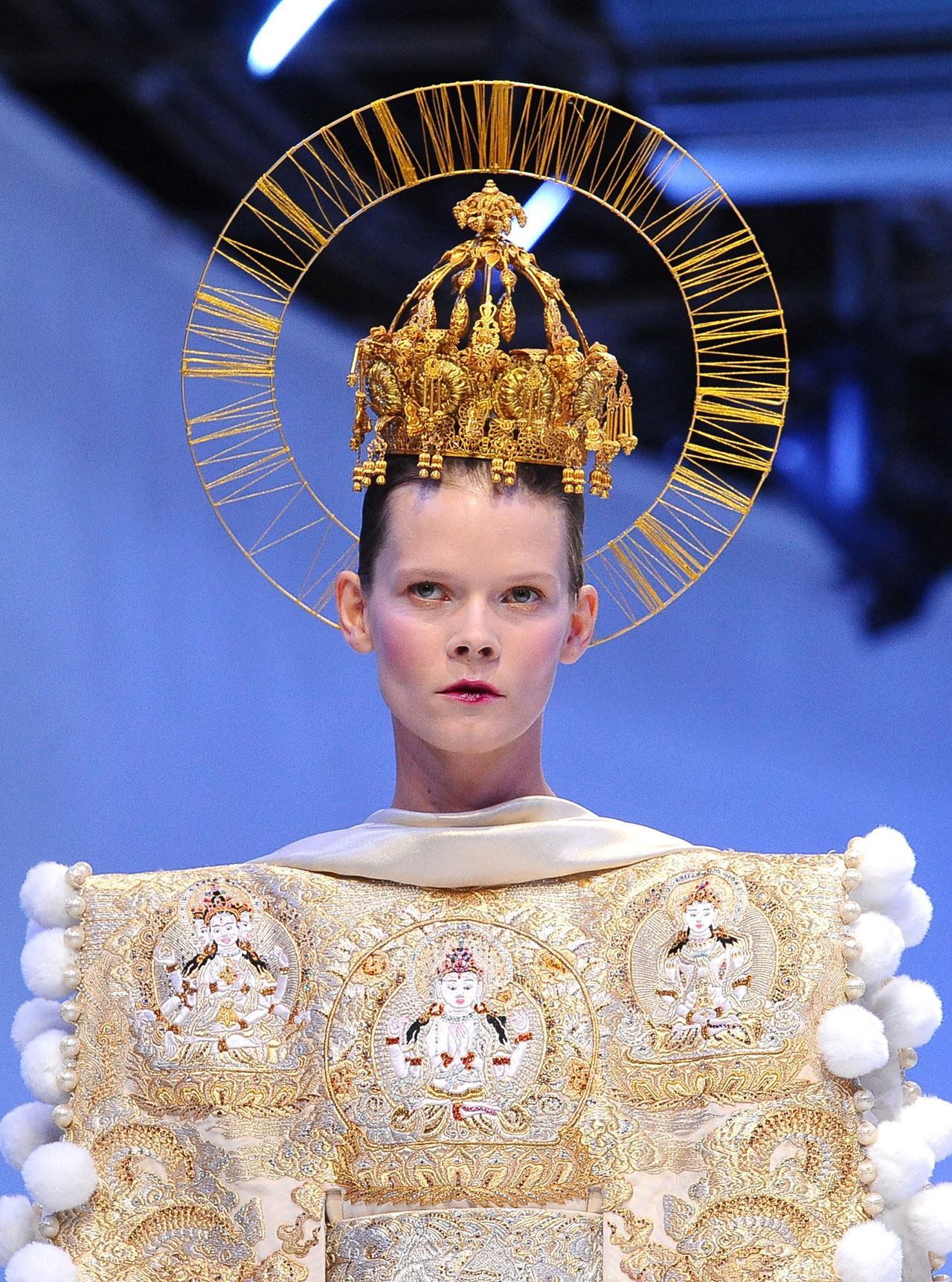 It might have been Spring couture season but Guo Pei set her eyes on the Himalayas and the peace of wintertime for her exaggerated runway unveiling. Models like Irina Kravchenko were palely powdered, with a sense of being frostbitten and windswept, sporting added details of frosted eyelashes and red-stained lips. 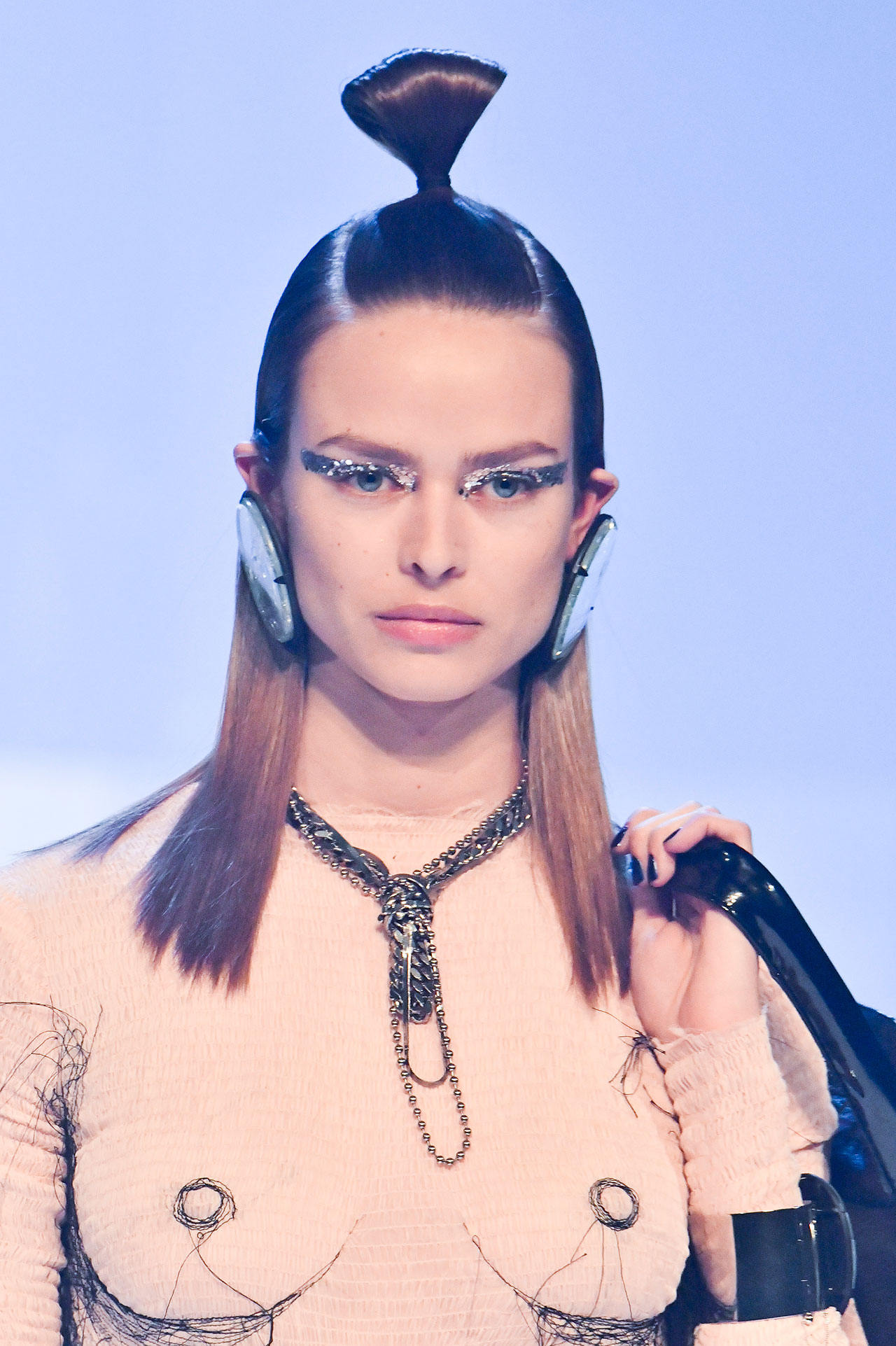 Photo by Victor VIRGILE/Gamma-Rapho via Getty Images
Jean Paul Gaultier bowed out of the design gmae this couture season, surprisingly announcing his departure from his eponymous brand. Beauty team Erin Parsons and Odile Gilbert sent him, and his troupe of models, off in style creating individual looks for each persona like Birgit Kos‘s sleek samurai knot. 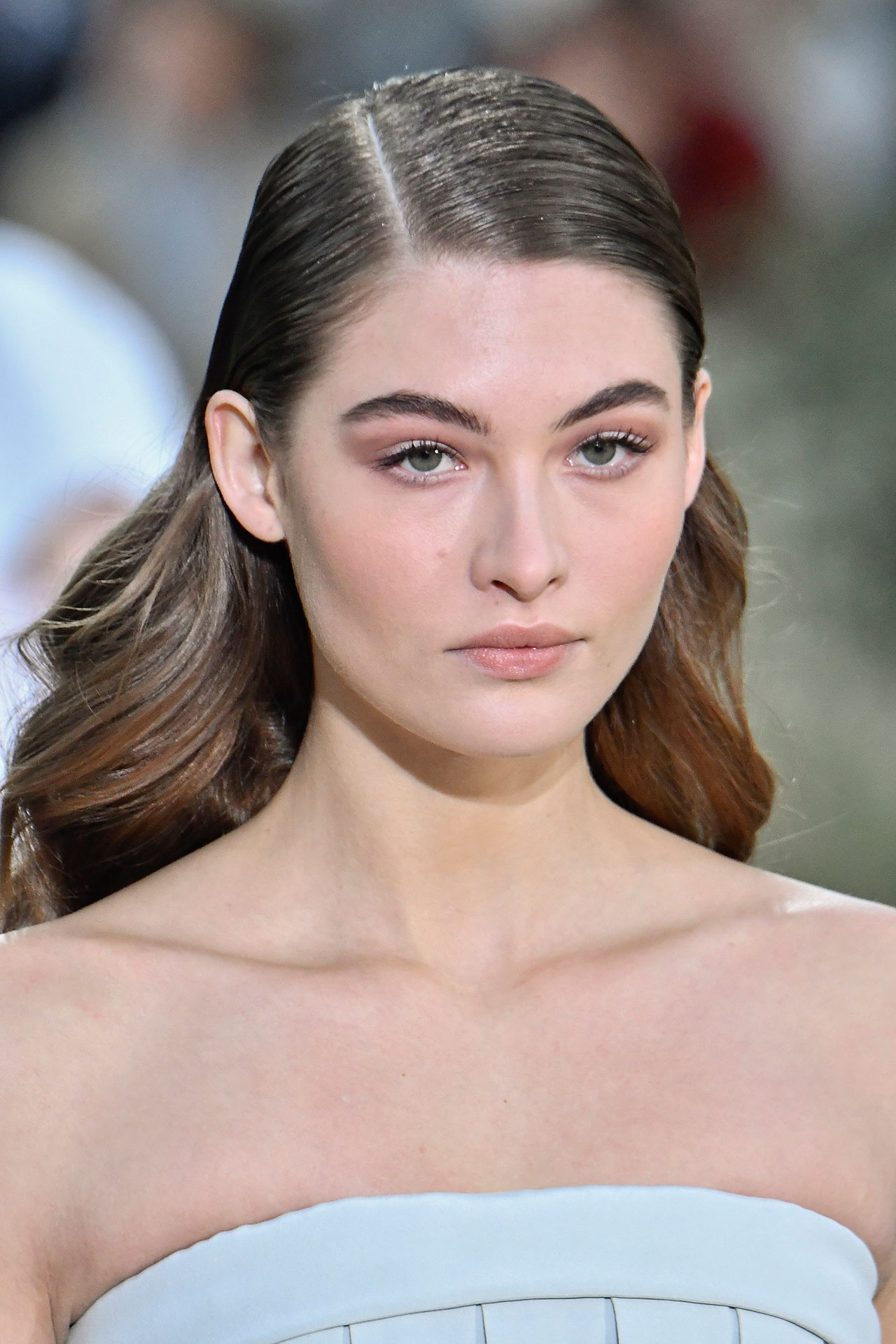 Chanel operated in a monochromatic palette so the beauty by Lucia Pica and Damien Boissinot stayed minimal, with a slate grey touch contouring cheeks and eyes with glossy hair, softly curled at the ends. 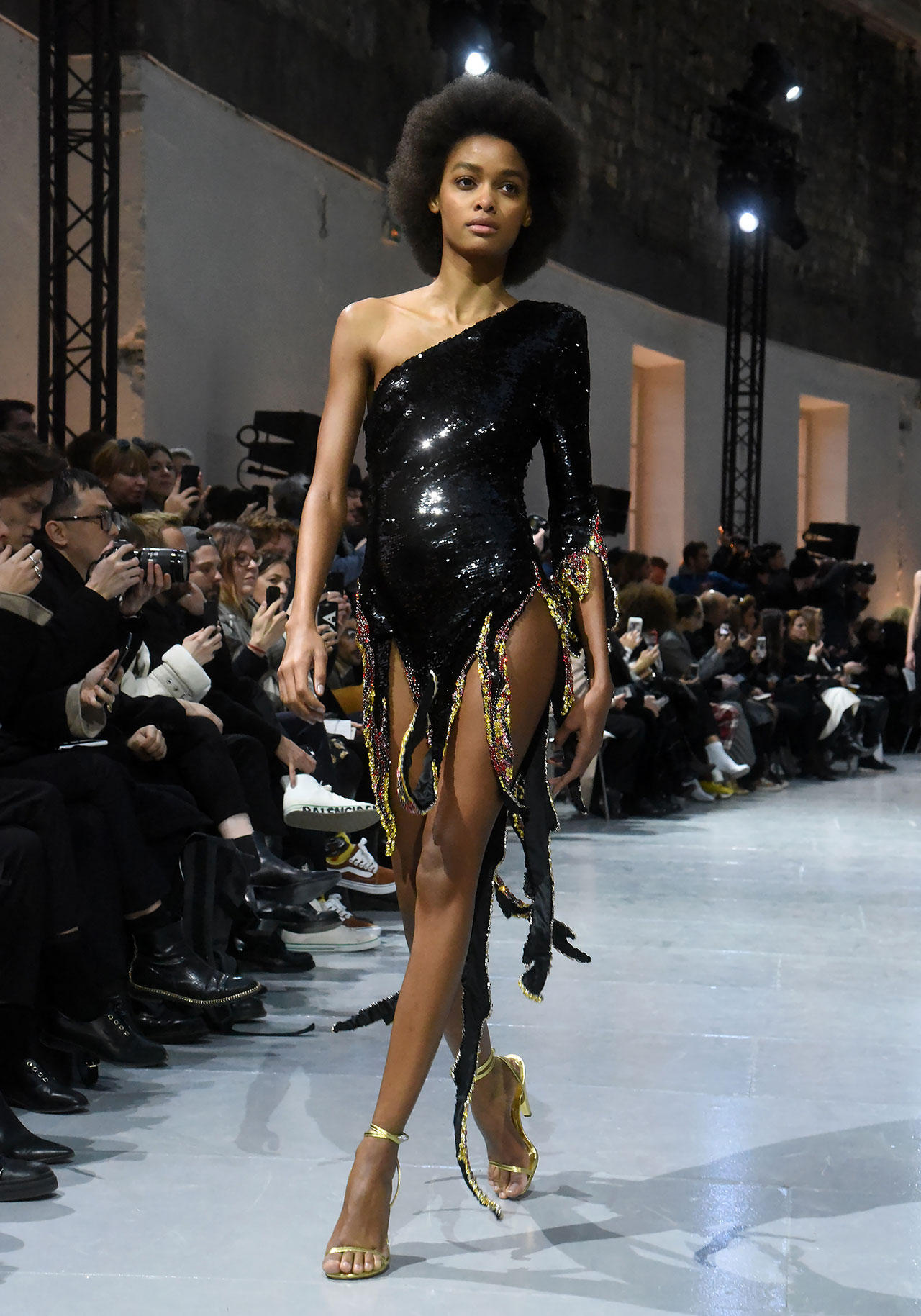 Photo by Foc Kan/WireImage
Individuatlity was key at Alexandre Vauthier as models adopting a more rockstar version of their already glamourous selves.
Lisa Butler and Sam McKnight matched the spirit with minimal rouge and slightly tousled hair. Blesnya Minher and her stretched-out afro matched her night-out look with the right attitude. 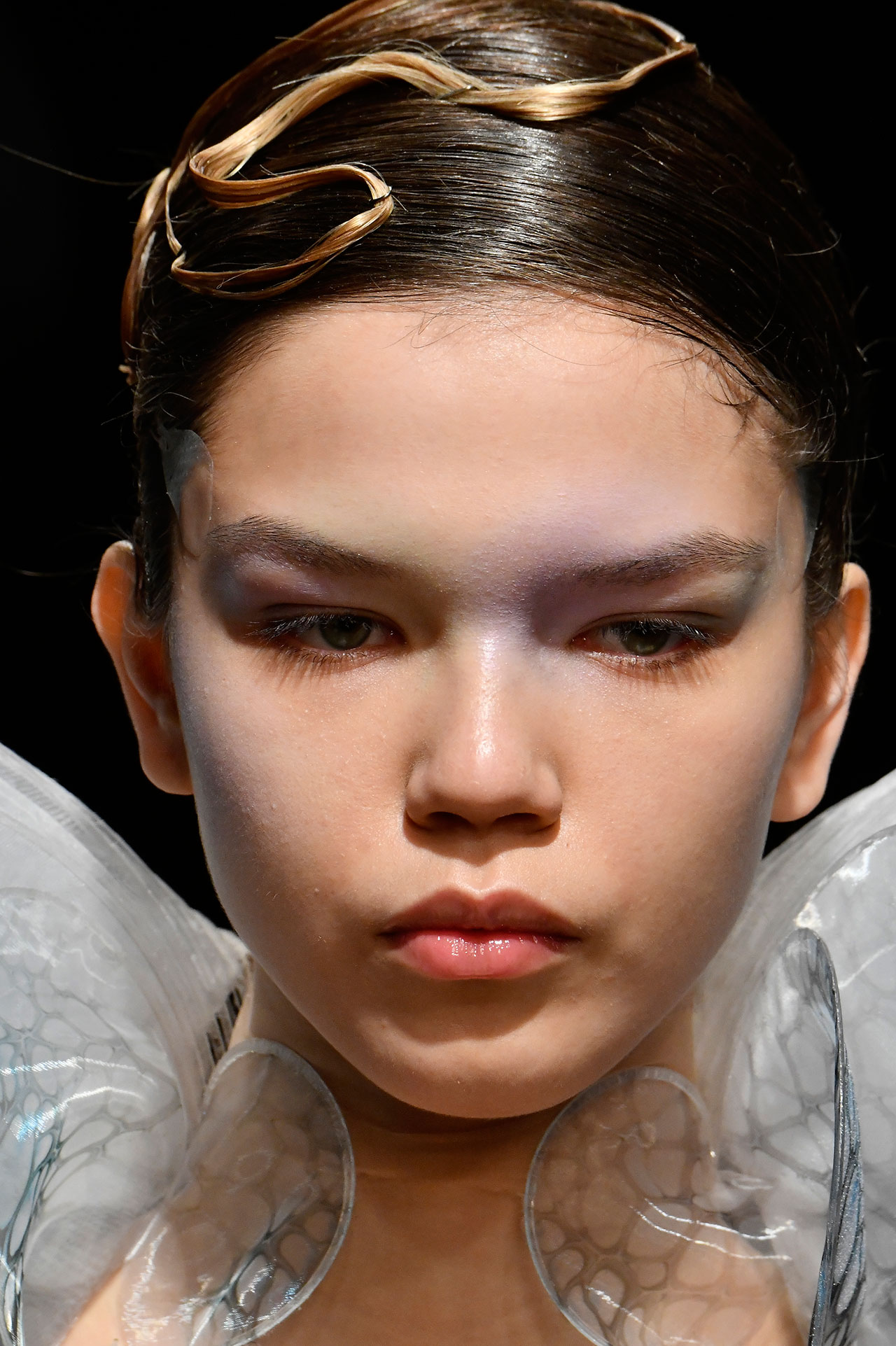 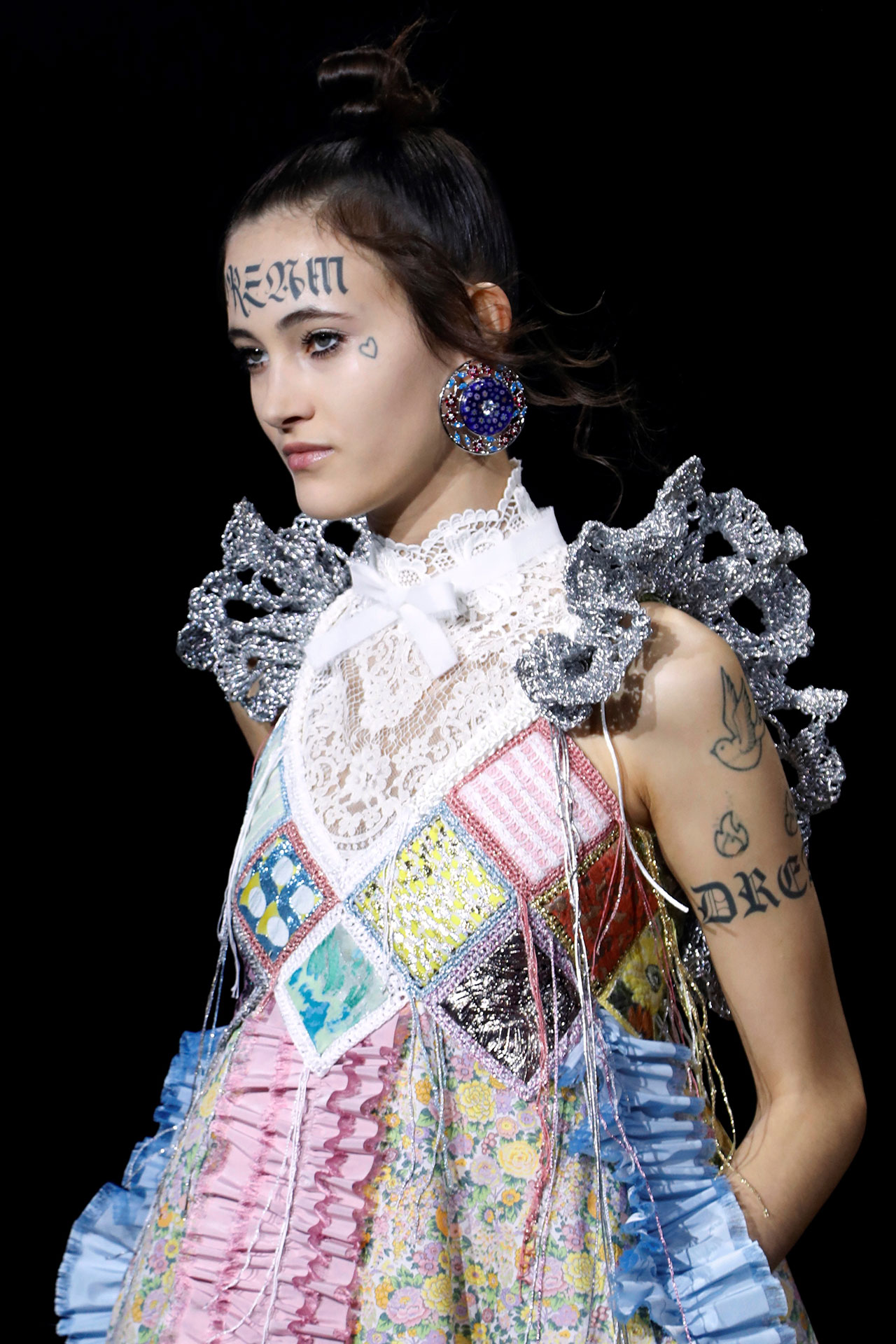